Boyan was less excited with the affair than me or Eva.

We took advantage of the moment on Saturday to take Eva for a haircut at Whippersnippers, in Tribeca. She had mixed feelings.

Eva and her daddy enjoying the Cat in the Hat

I woke up earlier than Vange or Cristin, much earlier in fact, dressed haphazardly, got onto the computer for a while … 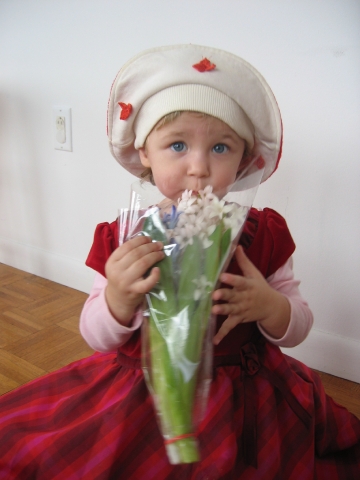 Hong Kong Was the Least of It

Business International transferred me to Hong Kong, finally, after more than a year of me first dropping hints, then asking.

They invited me out at night, some. They invited me to sail on their junk (yes, really) to an island in the bay, about 90 minutes each way. I bought a used Honda Civic and agreed to take over the apartment of the guy who was leaving.

I have no pictures, but vivid memories. No, I didn’t go, after all. It’s a long story.

We moved from Mexico to the United States.

I started at Stanford business school. We moved into a 3-bedroom townhouse at 100C Escondido Village, on campus. I started working with Creative Strategies International. Life was good.We drove our beige Rambler American station wagon from Cuernavaca, where we stayed the last few days in Mexico, to Stanford. It was packed to the gills. We shipped what we could via “air freight.” The picture here is of a stop in San Diego along the way.

The Car Filled with Smoke

The car filled with smoke on the first day, when we were barely driving up the hill from Cuernavaca towards Mexico City. La Manini (we were going to drop her off at her home in Mexico City on the way north) said she smelled something burning and we ignored her. Then the smoke filled the car.

We dropped off la Manini and continued north, with the car backfiring and exploding frequently all the way to Guadalajara, about 8 hours away. We found a hotel and a taller. It turns out that the car had been tuned wrong — in preparation for the trip — by a local mechanic. Nothing serious.

The Throat, The Jellyfish, the Desert

Sabrina had a throat and a temperature a lot of the way. We had to stop for antibiotics in Culiacan.

Mom got stung by a jellyfish in Mazatlan. Excruciating pain. She had to lay in the dark in a room with all the curtains closed, even the sleeping ones, because she couldn’t stand the light.

The temperature in Hermosillo was 45 degrees centigrade. Do the math. We’d waited to stay at the Bahia San Carlos in Hermosillo for years, since it had been way too expensive for us the first times through Guaymas. We couldn’t stay out doors, it was too hot, and the room was dark and hostile.

We crossed an immense desert between Caborca and San Luis without seeing another vehicle, or maybe only two or three, in 100 miles. We had to go west south of the border instead of crossing into Nogales because of visa processing. When we got to San Luis, dark of night, finally out of the desert, we filled with gas and the car wouldn’t start. We hung at a dismal dark restaurant by the highway while the mechanic in the gas station tried to fix it. The place looked so bad that Mom wouldn’t let any of you eat anything except corn flakes and milk/ We waited, wondering what we would do if they couldn’t fix it. They fixed it.

It was near midnight when we got to the Holiday Inn in Mexicali. Hooray, civilization. Try to imagine how we looked at midnight after driving from Hermosillo, having the car go dead, at midnight.

Interesting, somewhat chilling note: in the middle of the desert afternoon, hours away from San Luis, we stopped for everybody to pee. It was weird, there was no shelter, just open desert, so you could see for miles, but there were no other vehicles so privacy didn’t matter. The desert must have been 115 degrees hot. There was no shade. I decided, just for I don’t know exactly what reason, to leave the motor running during the five-minute stop. Just in case. The next time it was turned off, which was in San Luis, it didn’t start. Think about that.

Next day, bone exhausted from Mexico and hungry to cross the border, where things seemed bright and clean and in working order, and cooler, and not covered with a fine grit dust sand, we were turned back. They couldn’t process the residence visa in Mexicali on a Saturday. We had to drive west again, south of the border, through another desert, to Tijuana.

The visa process was hard, demeaning, long lines, abrasive, too many people, including Mom and me and three blonde children. It took hours. There was no preferential treatment for gringo faces and little blond children. They found us all extremely annoying.

Finally we crossed into San Diego. I was enormously relieved to be back on the side of the border in which, if the car broke down, I could get motels, and help from parents, and so forth.

This is a picture of the next day, after a night in the Holiday Inn in San Diego:

The happiness you see on the faces was real. It was a different world. We had grown very tired of Mexico and very happy –despite all the uncertainty — with moving to the United States. We had planned to spend another night in San Diego and see the San Diego zoo, but we couldn’t resist, we drove to Disneyland. We took a motel room in the annex section of the Disneyland Hotel. We had made it. This was such a good time. Anticipation of happiness. And no, it wasn’t like “and then everything bad happened.” In fact, things stayed good for a long time.

What Happened to Hong Kong?

What happened to Hong Kong? It turns out that in January of 1979 I spent three weeks with my parents to get a nose job. They had to ream me out because the allergies had caused nasal polyps that meant I never breathed through my nose. This was the second time in my life, the first in 1965 when I was 17.

While I was there, I took advantage to interview for a job with Wells Fargo bank, which was then headquartered in San Francisco. Dennis Nathan, who had been in charge of Wells Fargo in Mexico, had become a friend and recommended me. When I interviewed, they told me I was an unlikely candidate because I didn’t have an MBA degree.

One morning when I was up very early doing pushups in the sunny spot on the living room rug, Dad walked out in his bathrobe, with his coffee cup full, and tossed me the business section of the San Francisco Chronicle. The headline said Stanford MBAs were getting huge salaries. Dad said I should get the MBA, why not, and I said don’t be silly, I have a wife and three kids. He said what the heck, go over there, talk to them, see what they say. Applying doesn’t mean you have to go.

This was one of my dad’s great moments. Advice gently given, no pressure, just a suggestion, no resentment if it wasn’t followed. And in this case, it was followed. I went, I talked, I applied. It wasn’t trivial. I had to take the GRE exams, do essays, get transcripts from Notre Dame and University of Oregon, the whole deal. I completed my application just before I left for Hong Kong.

When I returned from Hong Kong Stanford has sent a telegram. I had been accepted. that year they took one of every 25 applicants. I hadn’t really taken it seriously, but suddenly it was real.

Two months struggling with the decision. Mom said: “Tim, don’t worry, it’s both of us. We’ll take the risk together. If it turns out wrong, we’ll deal with that together. You hate your job now. It’s time to take a risk.” Or something like that. She was always in favor of education. I would never have quit the job and gone back to school without that kind of attitude. This was one of the great moments in our history.